Hello everyone, for those who already know me, I have never been very active on smogon but will attempt to do so throughout Gen 9.

I wasn´t planning to post this team, but as I got to top 5 on ladder and many people started requesting the pokepaste I figured it would make sense to explain it in detail, as it is now the most common Stall team in SV OU: 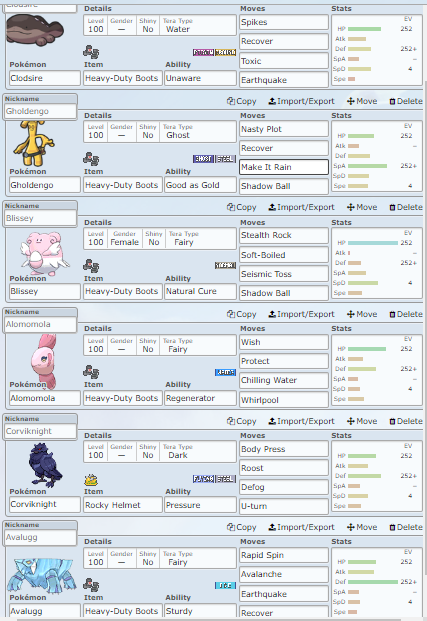 The core idea of this team is to always win the hazard war by enforcing hazards to stay up through Gholdengho´s ability and ghost typing, while being immune to oppositing hazards due to Heavy-Duty Boots Spam, in a generation where very few pokemon get knock off to remove them.
Gholdengo´s ghost typing makes it immune to Rapid Spin, while the "Good as Gold" ability blocks oppositing defog, it´s steel typing also walls the new "Mortal Spin", meaning that the only way you can remove hazards in front of Gholdengo is through the use of "Tidy Up", which is only learned by Maushold and isn´t a consistent method.

In order to remove hazards from the field, the opponent would need a rapid spinner that can threaten gholdengo in some manner, (Cyclizar´s knock off, Great Tusk´s Earthquake). All off the pokemon capable of doing so can get worn down by hazards, status, or being damaged on a switch, meaning that long term the team can win the hazard war. A key aspect to note, is that corv is the knock off absorber in the team, and that there are a few Pokemon that learn knock and are capable of threathening it, like Great Tusk when under the effect of a Choice band or an Energy Booster, so, either playing around it or sacrificing the most useless team member against it will be necessary to bring alomomola or Tera Fairy Avalugg in safely and neutralize it.

The hazards available to this team are blissey´s Stealth Rocks and Clodsire´s Spikes, which can be set up against any pokemon that doesn´t represnt a threat to them. It is important to note that there are very few Spikes Immune Pokemon added in this generation, as there are no dominant flying types/levitate users/ Magic Guard Pokemon in OU.

With hazards up, oppositing offensive pokemon, either carry Heavy-Duty Boots, meaning they can´t carry Energy Boosters, Choice bands, Life Orbs etc; or take hazards damage on every switch, making defensive counterplay effective, as the opponent has less possibilities to double switch and pokemon will be at lower HP to begin with.

Now that the core idea of the team has been explained in detail, I will explain the roles of each member of the team, as well as how to choose your tera based on Match-up accordingly.


Starting with arguably the best defensive pokemon introduced this generation:

Clodsire is a physical Unaware Wall, that unlike Quagsire, keeps enough Special Bulk in order to deal with Special set up sweepers like Nasty Plot Gholdengo, Calm Mind Flutter Mane (now banned), or even special versions of Iron Valiant. On the Physical Side, Clodsire walls Kingambit, Physical versions of Iron Valiant, some Iron Thorns sets, SD Lokix, among others. What truly is impressive about Clodsire is the new amount of pokemon you can wall by using Tera Water; suddenly, you are a counter to SD Chien-pao(excluding Tera dark or electric), Belly drum Cetitan, while also dealing better with Iron Moth, Gholdengo and Chi-Yu.
You need to be carefull with your recover PP, as this pokemon can switch into many different threats, and you should use it to deal with only the threats the rest of your team can´t cover.

Gholdengo´s ability does not only block defog, it´s usefullness might even be superior to Mega-Sableye´s Magic Bounce in past generations.
Good as Gold makes this pokemon immune to spore, which combined with its defensive typing, makes this pokemon a hard counter to Breloom.
It can also deal with Espathra if you nasty plot on a predicted protect, although if it calm minds as you nasty Plot you will not be able ohko it and will likely be forced to sacrifice avalugg´s sturdy to finish it off, or tera dark by surprise on Corviknight as Espathra goes for Stored Power.
Gholdengo is the team´s win condition, carrying both recover and nasty plot in order to set up and break bulkier teams or revenge kill some pokemon against offensive teams. Tera ghost, removes its ground and fire weakness and increases shadow ball´s power while keeping the spin block option; generally you only tera ghost it to set up on Water Absorb Clodsire, Ting-Lu, or if you are predicting a calm mind hatterene mystical fire; although there might be other cases where you will need to spend your Tera on it.

Blissey is obviously the main special wall of the team and was pretty much mandatory to deal with specs Flutter Mane before it got banned. It walls Iron Bundle, although taunt sets can be annoying; will almost always deal with Iron Moth setting up, Gholdengo, although it might trick it specs, while nasty plot variants can be problematic, you shadow ball ghold once to pop its air baloon and then go Clodsire to wall it. "Make it rain" can put too much pressure on clodsire, so sometimes you will need to use tera Water on it. Blissey can also pp Stall Skelidirge´s torch song when paired with Clodsire, although the inevitable result of this is Clodsire getting burned by will-o-wisp, which can be very annoying. Tera fairy works for emergency scenarios where you can absorb a fighting type move and KO a dangerous low HP pokemon with seismic toss while mantaining overall type neutrality to other special moves. Realistically you never waste your Tera on this.

Alomomola is the only Regenerator Pokemon on the team, it walls all Palafin sets, although you have to play accurately against bulk taunt, since you can´t waste chilling water pp and have to be carefull with drain punch. Alomomola is a counter to non SD lokix as it absorbs u-turn with Regenerator. Alomomola can force progress through the use of whirlpool although water absorb clodsire will wall it.
Alomomola is also the main Great Tusk switch-in on the team, if Great Tusk is energy booster and decides to Rapid Spin, Knock off, or Stealth Rock as you go to alomomola, you chilling water it the next turn and it won´t be able to 2hko mola, making it useless outside of Rapid Spin for the rest of the game. If Great tusk, however, decides to attack you on the switch and is max attack, 2hkoing you, you might need to sacrifice a team member to neutralize it or make a risky play by going avalugg on headlong rush and utilizing Tera Fairy to stop it. Tera Ghost works as additional spin blocker, while dealing with tera fighting Palafin.

Corviknight is the only member of the team which does not carry Heavy-Duty Boots, due to its spikes and toxic spikes immunity. This also makes it the team´s knock off absorber, although some knock users may threathen it, like Great Tusk. Rocky helmet is usefull to punish uturn, and other attacks, especially Maushold´s Population Bomb. This pokemon walls Meowscarada, although taunt can be annoying. It is also the main kingambit switch-in on the team, since Kingambit either spends the Tera to kill corv or trades itself for damage. Defog is generally useless, although it can be helpfull in scenarios where your opponent does not have Gholdengo and has knocked off your pokemon´s boots. Tera Dark can be used in an emergency against kingambit or against a low HP Espathra clicking Stored Power.

Last but not least we have Avalugg, the bulkiest physical wall of the team, which can deal with banded Chien-Pao, although Swords dance versions would require you to run body press to be guaranteed to wall it, since earthquake is only a 3hko (earthquake being a surprise move to hit gholdengo or skelidirge on the switch). It walls Dragonite, Roaring Moon, Brute Bonnet, also dealing with Baxcalibur at times. Sturdy can be a great last trick up on the sleeve against a dangerous sweeper, while Tera Fairy allows this Pokemon to wall Great Tusk, Iron Hands, Iron Thorns, deal with Chien-Pao Better etc.


Finally, I wanted to list a bunch of problematic pokemon and sets for this team, pay attention to the Tera types of each set to understand why they are problematic: 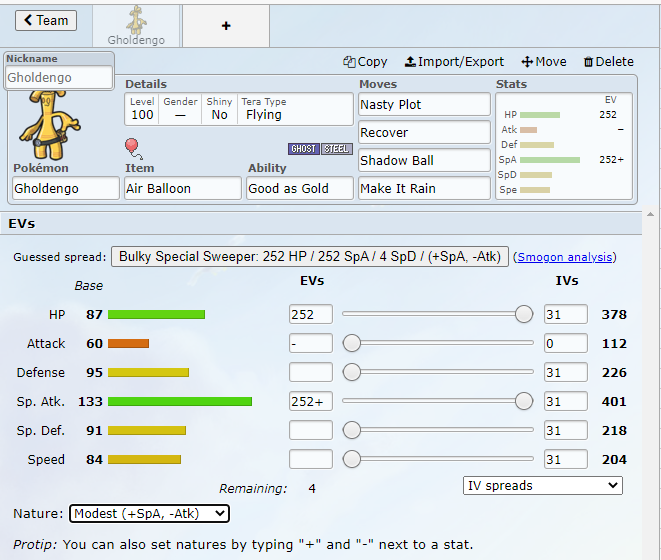 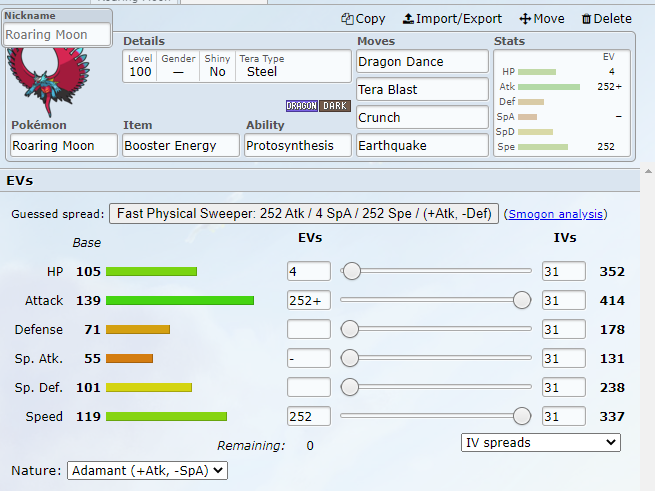 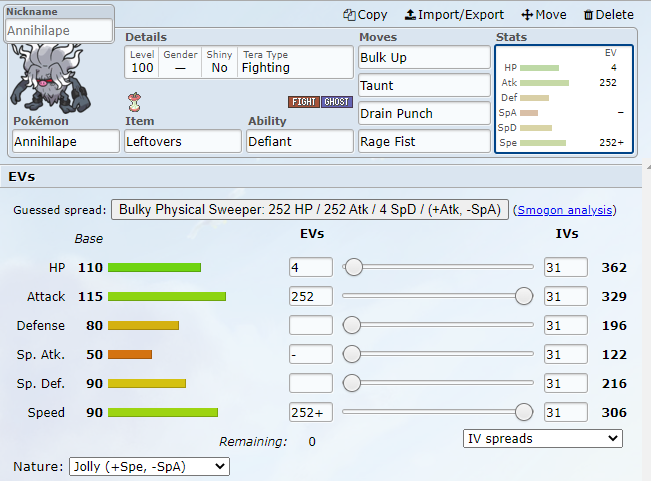 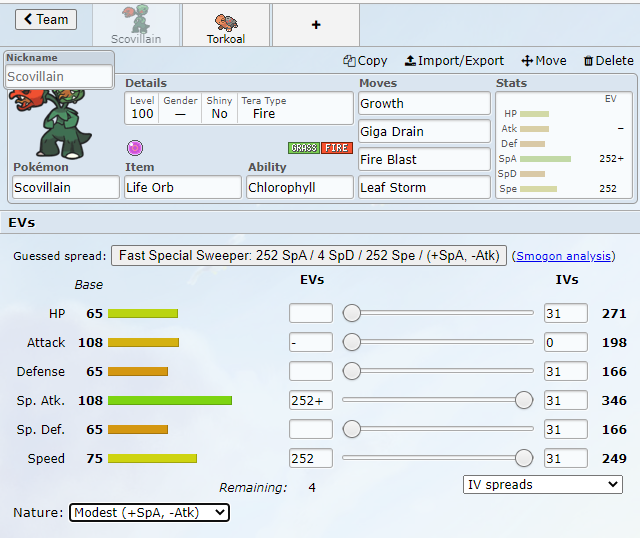 Stall is looking very interesting this gen, and boots spam is very cool. Won't Bpress over EQ be better for avalugg, though? to ensure that you beat chienpao without having to go corv?

Still can't believe I didn't realize Clodsire wasn't Water Absorb. Could have had a chance with my Palafin :(
Good team (Ghold annoying af though).

Your team is amazing, though is Avalugg necessary? I prefer Alolomola in this place, since there are 5 boots

For sure, mainly due to the recent changes in the metagame, avalugg was very good against houndstone and the protosynthesis abusers, but with the first banned and protosynthesis nerfed stall teams will adapt and start running a better 6th slot.

Really nice team, I had fun using it!

Hey, with palafin gone, does amoongus become a better regenerator than alolamola? It was used because it could beat zen headbutt/ice punch, but since they are no longer an issue, I think the value spore brings is better than what alolamola can do

Is Spore that valuable in stall? Toxic is gone but it isn't really valuable imo since you can't hit

Soosthemoose said:
Hey, with palafin gone, does amoongus become a better regenerator than alolamola? It was used because it could beat zen headbutt/ice punch, but since they are no longer an issue, I think the value spore brings is better than what alolamola can do
Click to expand...

Right now the biggest threat to the team, or any stall team, for that matter, is aniihilape, therefore I replaced avalugg with flame body talonflame, this makes the team a bit more weak to chien pao, so I think keeping alomomola is still a good idea.

Any reason I'm missing why Amollaoaolomola has a -SpA nature?

Mata Hari said:
Any reason I'm missing why Amollaoaolomola has a -SpA nature?
Click to expand...

Probably, if I recall correctly, because Chilling Water day one was coded as a physical ice move?