This thread seems to have the curse of killing the OP...... meh, maybe I'll finally quit this damn game.

Approved by: Sweep
OP adopted from Trainer Au and Steelphoenix
Credit where credit is due to original artist of unedited above image. I do not claim copyright possession of any physical or intellectual material featured in the artwork for this thread.

The premise is simple! Each week, you can vote for up to two of your favorite Ubers players to duke it out in a semi-official platform, where Pokéblood, sweat and lots and lots of salt will be spilled. You'll just be voting for the player you want to see play - the tier and format are (almost) entirely up to them, the sole prerequisite being that it must pertain to a past or current Smogon Ubers metagame - however, you may suggest a tier alongside your vote.

A few notes - first of all, please try to vote for active people who might actually get the match done. As much as I'd love to see Furai vs Blim, we all know that isn't going to happen. On that note -

Second, if you wish to be added to the above list of people who don't want to be voted for, contact me via PM or VM, or simply post in this thread. Likewise, if you want to be removed from the list, follow the same procedure.

Should you be voted for, congratulations! The community has decided they want to burn you at the stake bear witness to you and your fellow competitor give it their all. A few really basic guidelines include:
Now, there will be exceptions to this, of course. For example, Kebabe is a player known for using gimmicks and smashing people with them, and it would be acceptable to see him bring Venomoth to a match. However, if Haruno were to bring Venomoth to a match, I'd saute him in a marinade of Lord Outrage's juicy, flavourful tears.
Aside from hype value, we want to watch this live! And isn't that just a little bit sad.
The world deserved to see Edgar vs xtrashine SPL 6, but they can't now. >:[ Anyway, the standards for these matches are relatively high, and replays are a great resource both for those wanting to get into the game and to those looking to spectate a decent quality match at leisure, especially if they can't be there while it's actually happening.

I will occasionally force ORAS to be played (I'll never force an oldgen to be played), as it has the most appeal to the general public, and I'm sure several of the BotW mainstays would prefer to play oldgens, so I've got to have some kind of countermeasure.

Lastly: there is a giant-ass red button hovering over this thread that says "exterminate", and I retain the right to push it at any given time, whether it's for general stupidity, activity decline, whatever. Don't make me push it.

That's not too complicated, right? Now then - let's make what was in the past the most popular thread in Ubers a thing again!

and i vote for basic reading ability but i digress, fine

Week 1 Voting is now open! (have mercy on our souls)

e: This week's Battle of the Week should be ORAS, to kick things off on the right foot.
Last edited: Oct 6, 2015

gonna go ahead and vote sweep and steelphoenix

The Iron Man of Ubers

In an Iron Man of Ubers(All-Gens BO7) naturally.
Click to expand...

One shudders to think of what would happen.

I need 2 computers for that amirite

The greatest story of them all. 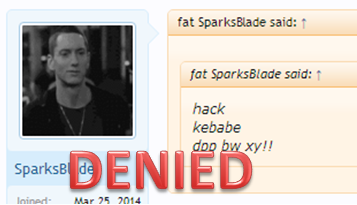 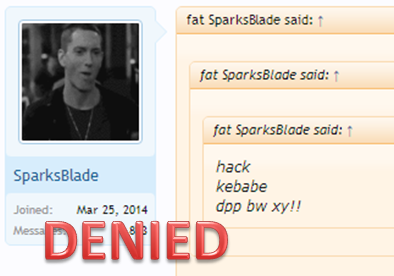 I vote Outrage vs Astounded

I didn't light it but am trying to fight it.

Ok, the first BotW will be Astounded vs Lord Outrage in ORAS, Bo1 or Bo3 or w/e is up to you two. Please get this done sometime before next Monday ideally, if not that's fine. LGI :D

we will become who we are meant to be