uuhh just a lil' suggestion for the OP: maybe increase the marker to 4 darkhorse pokemon?let's face it, one can run feebas/magikarp + top10 pokemon and still do well

Scraggy @ Eviolite
Ability: Shed Skin
Level: 5
EVs: 236 Atk / 36 Def / 236 Spe
Adamant Nature
- Dragon Dance
- Drain Punch
- Knock Off
- Poison Jab
Ashley11 I did it! I got A rank again. The only 2 losses were for the same reason. Somebody got a lucky Iron Head flinch on my Ziggy that prevented me from setting up. Hax is hax. But I did it. And here's my evaluation

11/10
I swept more times with this thing that not. It's absolutely phenomenal. Not a single bad thing can ever be said about my boy ziggy.

Magby: 4/10
I could never get this thing to work. I would never find time to set up, and I was always getting outsped or hit with priority. Also, Magby is super weak. I was unaware that Mach Punch barely 2HKOs Pawniard, but apparently is does. So yeah. Magby was hugely overshadowed by the awesome power that is Zigzagoon. I probably could have run a Magikarp in its spot and only lost maybe one extra battle.
Last edited: Mar 9, 2014

Ashley11 said:
The rules of the project are as follows:
And yeah as shown in rules, you won't get points for it :<


EDIT: Are these different pokemon from first time?
Click to expand...

I'm using different pokemon from last time. Actually, all 6 are different. So I won't get points for it?

You WILL get points Kiba Roserade I thought you were using same pokemon :P go for it

The Avalanches said:
You ballsy bastard.

Also, Ashley11 , is there a change in the points if you use more Dark Horses?
Click to expand...

Yes there is :O. Lets say you got silver rank with 3 pokemon. You'd get 2 points normally for silver, then +1 for the extra pokemon. each extra pokemon is 1/2 of the original points value added on.

More talk about my Dark Horses

Trubbish is a phenomenal pokemon and one I would have used regardless of if this was a Dark Horse challenge or not. It counters all relevant knock off users in the tier, protecting Missy and Porygon. I chose thief instead of recycle or spikes to cripple switch-ins to Trubbish and to regain an item after BJ is used up. Trubbish is an excellent pokemon in the current metagame and he is the pokemon that I believe deserves to be LC OU more than anything else 10/10.

Finneon is actually a really good scarf user in the metagame, unfortunately the problem is not that its bad, its just outclassed by Chinchou. Except in the rare situation of Finneon v. Chinchou (Finneon can turn away faster into trace Porygon who becomes immune to volt switch) or using its immunity to water to switch in on a SSing tortouga's and take it out did scarf Finneon outperform scarf Chinchou. Its unpredictability was nice and storm drain came in handy a couple times but its movepool and typing were outclassed by scarf Chinchou. The only time I can really recommend Finneon over Scarfchou would be if you need the reliability of U-Turn over volt switch 7/10.

Magby is now my favorite Belly Drummer in the metagame, being able to reach 19 speed is great as it allows Magby to outspeed most every relevant threat (and get off fast belly drums) and speed tie with the fastest pokemon in the metagame. Magby is a bit frail so it must be played carefully and mach punch was a bit unwhelming at times but it was an excellent mid to late-game sweeper and surpassed my expectations for it. It also acted as an emergency revenge killer for things like Pawniard which saved my hide a couple times. Forgot to add Vital Spirit is excellent too as it turns foongus into complete set up fodder. 7.5/10

Ok here are my dark horses:Surskit,ZIGZAGOON woooooo,trubbish,Axew,tentacool and karrablast. A very random team but let's gooooo.

I will be usingb the gengar/mewsthebest profile
Last edited by a moderator: Mar 12, 2014

I have been hit with a crapload of things in the past week, sorry :/ I will get this updated and the teambuild comp updated now, but I will be very inactive besides for updating in the upcoming weeks, I have gotten sudden changes and events happening which is taking away my time. 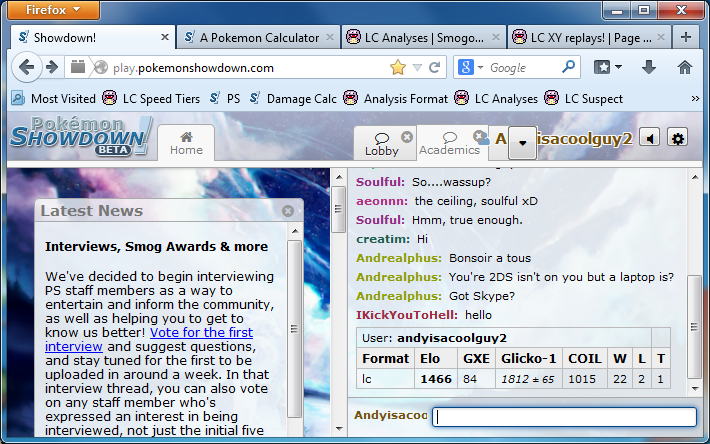 Shellder @ Eviolite
Ability: Skill Link
Level: 5
Shiny: Yes
EVs: 236 Atk / 76 SDef / 196 Spd
Adamant Nature
- Icicle Spear
- Rock Blast
- Shell Smash
- Razor Shell
Warm Fuzzy Questions:
Omanyte: 8/10
This team was so hyper-offensive that hazards were necessary, and Omanyte was pretty good at getting up at least SR and usually a layer of Spikes. I originally had Hydro Pump on this, but its accuracy feels like 30%. My only grievances about Omanyte were that it started off slow (Weak Armor rectified this), it didn't have as many "lives" as Dwebble, which I'm used to, and I was limited to one attacking move, but besides these, Omanyte was a fantastic addition to this team.

Karrablast: 9/10
Because this was a hyper-offense team, I needed a way to check faster pokes and still hit hard; moreover, huge defenses or resists weren't that necessary since hyper-offense is a different style of play. Karrablast hits like a truck with Megahorn. Also, since it was so underused, few people actually knew what I was going to do with it. How fast is it? Is it Scarfed? What moves does it run? Am I supposed to be wetting my pants at the sight of this thing? Granted, the element of surprise won't help a Dark Horse when it's LC OU, but it helps before then. But, seriously. No Guard STAB Megahorn is sweet.

Finished again Ashley11, whenever you see this.

still trying movesets out. will post back after ten games.

Didn't do all that well. Went 7-5 then gave up, they don't have much rhythm and I couldn't find good jobs for them to do. I'm sure there's a good niche for them, especially hippopotas, but I just can't seem to find it. Hard to find good teammates besides the obvious ones. Dweeble helped a lot for sandstorm teams.
Last edited: Mar 22, 2014

I don't think either of those are Dark Horses.

They are both under 3.41% usage(according to the usage stats of Febraury), so yes they are Dark Horses.

Alright so let's answer those questions about my mons:
Vulpix: 6/10
To be honest, Vulpix was more of a liability than anything else. Of course, it is what allowed Bellsprout to sweep, but it offered no significant defensive or offensive presence. It could take one STAB hit from basically anything, and return a decently hard hit, but it needed to avoid knock off and super effective hits as much as possible. I would expect that a Modest Choice Scarf variant could do well on it's own, but with a timid heat rock set, Vulpix was just a little bit short on speed, bulk, and power. However, it gets a 6 instead of a 5, just because it was great at putting Misdreavus, Meditite, and a number of other mons in OHKO range for Bellsprout.

Bellsprout: 8/10
Bellsprout was a very threatening sweeper with Growth and Weather Ball, which is what makes it more useful as an all out sweeper than either Bulbasaur or Oddish. Bellsprout has just enough bulk to take a Sucker Punch from Bisharp, and has enough power to blast through walls like Spritzee and Porygon. The biggest problem with Bellsprout though, is that it is hugely vulnerable to Fletchling, and that it needs a boost in order to OHKO a lot of threats, and its not always easy to get set up. The bottom line is that Bellsprout and the other chlorophyll users just can't fill Tangela's big red clown shoes.

Miscellaneous thoughts: Chinchou pairs up very well with sun teams, and can take the strong flying type attacks that chlorophyll users fear, and it's slow volt switch is great at bringing chlorophyll sweepers back in after OHKO'ing or forcing out flying types.
Last edited: Mar 31, 2014

Heyo, I wanna try this even though I'm not completely sure how it works.
Probably picked a bad time of the month to start. Oh well.

Nothing special.
Other Comments:

I would to contribute this month. But I don't want to do as long as my "little" C Rank will be on leaderboard.

Which set of LC stats will we be using for this month?

Is Ashley11 still doing this?