Pika Xreme said:
but it has type advantage
Click to expand...

ZardX said:
That could work on how it escapes from the nightmare dragon but its probably a Ghost type
Click to expand...

ghost doesn't resist fairy and its not super effective either

Pika Xreme said:
ghost doesn't resist fairy and its not super effective either
Click to expand...

That makes sense, maybe the Kerfluffle will struggle


Welcome to the first spooky writing contest with CAPmons. The inspiration for this is that the forum is not necessarily always discussion, and Halloween is soon, so me, Old_Gregg and ItzViper482 decided to do this.

How I can participate?
You need to make a creepy story involved with the CAPmons and send it to me or to the other judges in the Smogon forum inbox or on PS.
How long should it be?
You can make it pretty much it as long as you want.

Nah, but this looks really fun to do, any I would not mind doing it at all. May help me learn to write anyways. i create then destroy

ZardX said:
That makes sense, maybe the Kerfluffle will struggle
Click to expand...

maybe the nightmare dragon will struggle

I may not have thought very hard about that, but really any effort was thinking way too hard

EDIT (to avoid bumping): In addition to the first 21 CAP designs I've described previously, we now have a fabulous pillow fighter (Kerfluffle) and a sleepy dragon that follows its dreams (Pajantom).
Last edited: Nov 12, 2017

Here's a lil Pajantom-smolgon doodle! Sad I missed the art subs but I love the winning design. 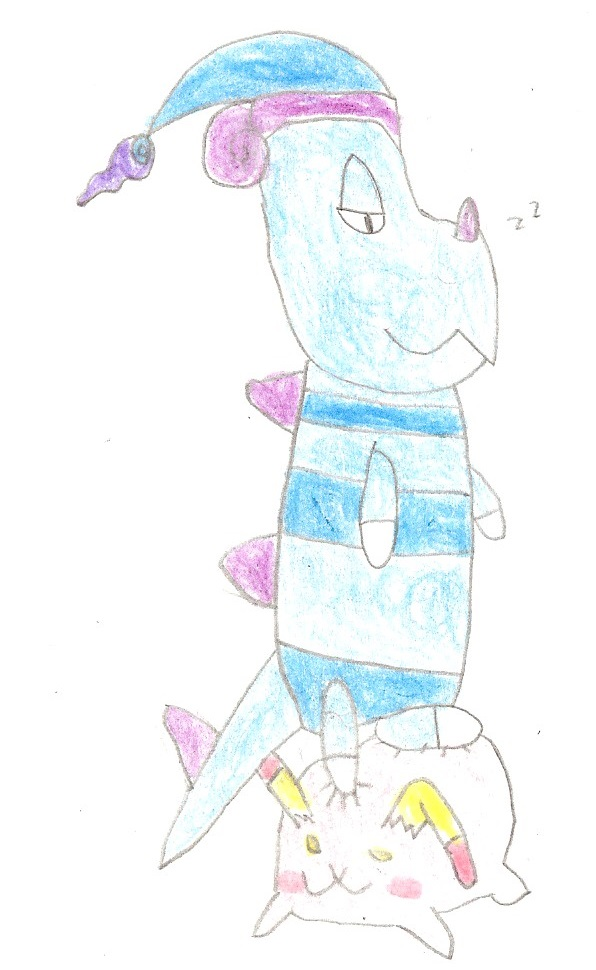 Made this drawing of two CAPs. Don't use Pluffles as pillows plz. 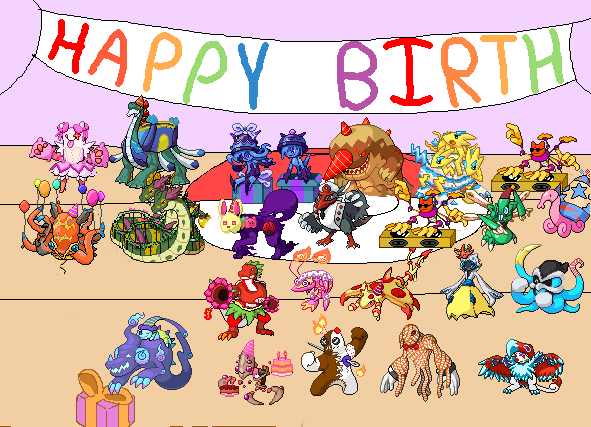 Today CAP is 10 years old! Let's celebrate!
Picture was made by Garbagery who i want give a huuuuge thank you to! Love ya man!
Sprites were edited by me and Garbagery using the CAP sprites made by the orginal creators. And huge thank you for the feedback! Again Happy birthday CAP!

Happy 10th birthday, CAP! I hope Pajantom goes live on Showdown this week as a means of celebration.

Flavour poll isnt even up yet so chances are slimm

Mike, that gif actually hurts my eyes. Pls no D:

Time to revive the thread, Gen 1 Pajantom sprites of Red, Blue and Green!

I wanted to make an Avatar for my Smogon and really really enjoy the aesthetic behind the sprites from the G/S/C era so I did something involving my sleepy guy in that style!!

glaceon431 said:
We need to get Pokemon of all type combos that haven't been made, no particular order (sorry if i include CAP combos, but technically they aren't actual Pokemon):
Non-legendary Mono-Flying
Fire/Steel
Water/Fire
Water Bug (besides Surskit, but that's not exactly common)
Steel/Water
Fighting/Flying besides Tomohawk, we need another
Dark/Flying
Psychic/Flying other than the _atus
Electric/Normal (as of this post, X and Y aren't out, so no Helioptile)
Fire/Normal (same with Litleo)
Water, Ground, Dragon, Dark, Rock, Bug, and others/Normal
Ghost/Flying
Non-legendary Ghost/Dragon
Psychic/Normal, other than Girafarig
I was going to say Ghost/Fighting other than Revenankh, but he fills the typing fine
Any other never-before-seen combo

Also, Tomohawk, Mollux, Krillowatt, and Fidgit all look able to evolve, so at least one should be able to be given an Eviolite, that could shift the metagame greatly.

We should give more Pokemon Tail Glow. We already have Krillowatt, Mollux, Scyclant, Cyclohm, and Malaconda who look like their tails are able to glow.

We should have Mons interacting, like the rivalry between Zangoose and Seviper, Palkia and Dialga, Groudon and Kyogre, the Kami trio, or Durant and Heatmor. Perhaps Arghonaut, Tomohawk, and Collosoil have rivalries because they're like the ground, sea, and sky, just like the legendaries from gen 3. If Krillowatt love in fresh water, maybe Collosoil accidentally stumble upon underground rivers filled with Krillowatt, who can obviously light up in the dark, and the Krillowatt get angry and release a Draco Meteor or Outrage that they can somehow learn. Perhaps Revenankh and Voodoom have scaring contests. Scyclant looks a lot like a modern Stratagem, who perhaps existed in ancient times so can fire of AncientPowers. Fidgit may play with Aurumoth's wings.

Wow, I was thinking the same thing. Also, I’m new and a pokemon competive noob. So don’t judge plz

As a heads up, that post is nearly 5 years old, but if you want to join in with the creation of a new mon, please feel free to add in your concept to this thread - although be sure to have a read through the rules and the current suggestions already posted :) Alternatively, feel free to just observe until the typing threads, where you can promote a typing that encourages the style of play espoused from the chosen concepts.

I'm not going to comment too much on the typing discussions - since that post, XY, ORAS, SM, and USUM have been released, in addition to the CAP creations Volkraken, Plasmanta, Naviathan, Crucibelle, Kerfluffle, and Pajantom, along with the release of Z-Moves and Mega Evolution have been made available to the community, which has shaped the meta very well, as well as a recent fairly in depth analysis of previously created mon bringing them in line with the updates the mon may have expected to see (and a slight rebalance of some of the worst mon in the meta; Voodoom, Malaconda and Arghonaut to name a few) had they been in the core game.

Also, I think that the meta not handing out +3 Special Attacks is a decent way to keep things resembling some internal balance consistency. Giving a bulky mon like Cyclohm or Mollux the ability to potentially get to +3 after switching into something that they resist is an extremely scary prospect.

Hopefully you see a concept that you're able to support or even put down your own within the linked thread though?

I know that’s over 5 years old. I was just commenting

I meant an evo for Krillowatt