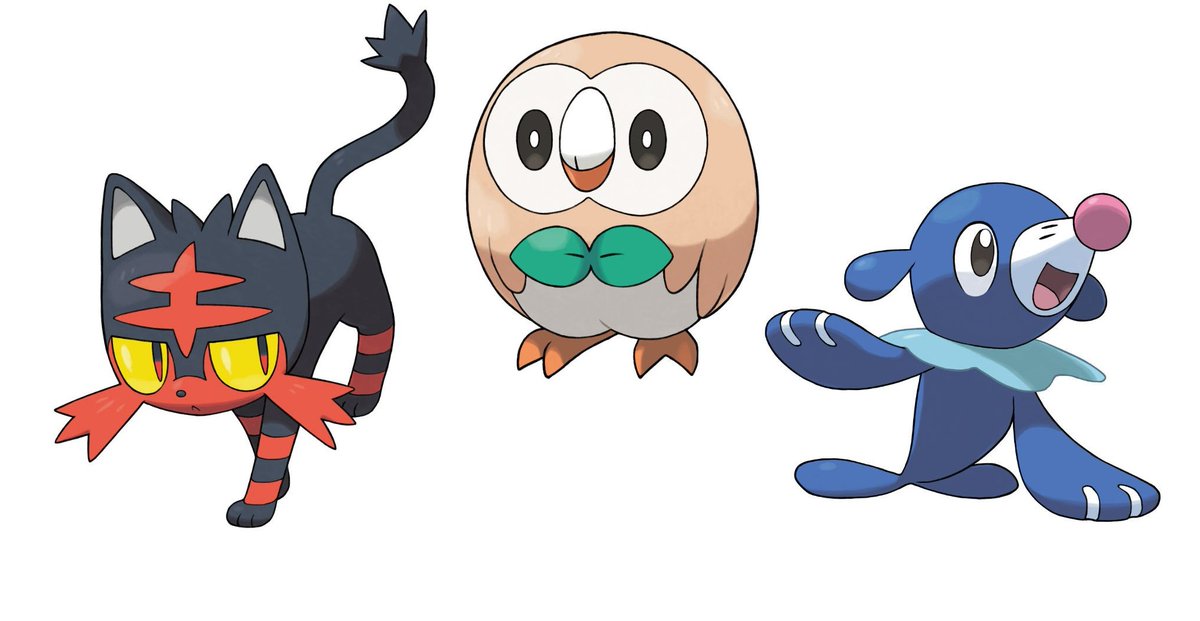 Discuss info about the new games that pertain to lc here.

Rowlet will face stiff competition with Hophip for a team slot.

popplio is easily the cutest j/s

If Rowlet's bulky enough I think it'll be a promising Fighting-type switch-in, functioning somewhat similar to Cottonee in terms of checking Pokemon but with Roost (I think that's a safe assumption). Ice Punch might become more common if Rowlet becomes somewhat of a staple, meaning Fighting-types lose out on a moveslot. However, I can't really see it becoming all that much of a top tier meta game threat. It's also looking to be SpAtk-oriented which means it'll be a decent enough Scald switch-in. If it gets Defog as well it could be relevant as a hazard remover, simply due to Grass being pretty effective against most Stealth Rockers. And its new move, Leafage, could be neat.

No comment on the others as they're kinda ugly and their typing isn't revealing all too much.

At first I didn't care for this batch of starters, but Popplio is quickly growing fond to me. The Circus vibe it gives off is very different, and to me, refreshing. It doesn't look like too much of a slouch competitively either. Seel, a Pokemon that shares its classification and sports a similar design, has access to many fun utility moves such as Encore or Fake Out, and Popplio being a trained animal only adds plausibility to it obtaining a wide movepool of tricks and tactics, not to mention the possibility of a Fairy-Typed evolution later on bringing out some cool egg moves.

Overall, I'm looking forward to seeing what gen 7 has to offer for LC. Here's to some fun and balanced additions.

popplio is gonna be S+

also rowlet looks dope. it better get uturn so i can build infturn 2.0.

Their viability will depend a lot on one of them (as much) getting really good hidden abilities, as starters aren't generally super good in lc. The only ones I can think of now are snivy and torchic, and they both became actually good due to having great abilities.

Rowlet can do good defensively if it gets roost/aroma/defog.
Im guessing Litten's final evolution is a fire-fighting/rock type, would be cool if it gets vacuum wave, aura shpere, focus blast.
Last edited: May 11, 2016

Vubon said:
Rowlet can do good defensively if it gets roost/aroma/defog.
Im guessing Litten's final evolution is a fighting/dark type, would be cool if it gets vacuum wave, aura shpere, focus blast.
Click to expand...

Litten looks pretty cool, I'm feeling either a fire/ghost or fire/fairy final Evo. Hoping the latter, as Fire Blast / Moonblast would be amazing coverage for the speedy special attacker it's looking to be. Rowlet could be cool, I'm getting a Cottonee-like vibe as far as a solid support movepool with some decent STABs (Seed Bomb/Brave Bird and any two of Leech Seed, Roost, Defog, U-turn, Sleep Powder, and Stun Spore if we're lucky) Popplio seems to be lean toward special but I can see a physical or mixed movepool being viable. I feel the final evo will be Water/Fighting and I can see some scarf set of Water/Focus Blast/Ice Beam/HP being something.

Hoping Popplio doesnt get screwed in the coverage department like Oshawott did.

Yeah, I agree that Rowlet is going to be cute and all causing Fighters trouble.

Litten i really dont have much to say about because I feel Litten is already suffering from being a pure Fire-type and well it's not like Fire-types are in right now.

Head TD
Things that are likely:

Each one will have around 315 BST, like all other starters
Each is unlikely to have any base stat over 70, since we have only one exception to that rule (froakie's 71 base speed) or a stat below 35
They're almost 100% going to have Overgrow, Torrent, and Blaze as their abilities. HAs may be available from the start like XY or not.
Each will almost definitely have access to the '120 base power' attack (Fire Blast, Hydro Pump, and Solar Beam) and Rowlet will probably have Leaf Storm as well

Overall they're starters, their viability will probably be heavily linked to their Hidden Ability like pretty much every viable starter. Probably not too much to be hyped about. Maybe once we see the evolutions we'll get a sense of how their stat distribution is likely to turn out.

What jumps out to me most about a Grass/Flying type is that they can switch in on a Sleep Powder, Stun Spore or Spore (or any grass type move for that fact) and threaten the common pokemon that use them with a STAB super effective Flying move. Similar to how Bellsprout sorta can, or how Snover can. Just like anyone I find Cottonee annoying so I'm excited to see it poetionally gain a counter.

I personally don't have much interest in the other two pokemon, because I am satisfied with the Fire and Water types we have available to us in LC. It'll take some great stat or ridiculous hidden ability for me to take notice.

LC Leader
They won't be useful unless that have quality HAs. They'll probably be slow, maybe 17 speed max kinda like Snivy which means they'll have to have something cute about them to be good. Their typings are generally meh, Flying / Grass is okay but it is weak to SR, weak to Poison (can't switch into Foongus so spore immunity is cool but not great plus Poison Jab Timburr might just KO after rocks), weak to Flying (Acro Foo doesn't care about it), weak to Rock (Stone Edge Mienfoo and Drilbur say hi), and of course every water type hits it moderately effectively (maybe its a Corphish and Bulky Tirt check??). Flat Fire-types are kinda awful unless they have great stats (which starts have yet too) or have amazing abilities--the probably low speed will be meh but if it has something special with coverage like Fire Fairy or Fire Ghost then this will be nice on webs or as a scarfer if it has good bulk and nice offensive stats. Then mono water needs 2 of good ability / good stats / good movepool to be decent so I expect this to be another squirtle: cute but that's all it has.

I don't think more than one of these will be at all notable after the new toy effect fades, and that's assuming HAs aren't worthless like Flash Fire.

Most of the stuff I was going to say has been said, but I was just thinking about how Popplio kind of has that circus seal vibe going, and circus seals tend to spin balls on their noses. Could it maybe get Rapid Spin?
Would probably be outclassed by Staryu if it did I suppose, but was worth a mention.

Litten= The speedy special attacker with a lot of coverage

I'd like to point out that Snivy, Chespin, Bulbasaur, and Treecko have all been massively improved by their Hidden Abillity's, whereas the fire and water starters don't have nearly as good of a track record of hidden abillity buffs.

Water has Froakie and kinda Totodile, while fire has Torchic and Charmander. Based off of this it's statistically likely that Rowlet might have a good Hidden abillity . *crosses fingers and hopes*
Last edited: May 12, 2016

Not too sure why everyone is calling Rowlet cute, I see a scary demonic bird that has hollow or black eyes that it uses to blankly stare at you.
I did a doodle of Rowlet front on and threw some ominous lighting to prove my point. This thing isn't cute. It's scary

no idea why i'm theorymonning (i'm procrastinating) since starters are usually rubbish anyway, but serebii says rowlet can kick, so maybe it might get some fighting type coverage which is good coverage with grass/flying stab.

again, going of the fact it can kick, and the fact that i presume leafage is specially based, then maybe it will have decent mixed offenses, so a mixed attacker with leaf storm, bird stab, kicking move and roost may be okay. it's stats will probably suck though as everyone says

based on popplio's description swift swim is the hidden ability (It's better at moving in the water than on land).

Love the bow-tie. Rowlet is looking to be the very first grass-type starter to get "first pick" on my initial playthrough of a pokemon game. I usually pick the water starter, but Popplio is going to be hard pressed to make its case against that fashionable owl. First starter that begins as a dual-type since Bulbasaur, too; that's a change of pace.

They could give Rowlet 30 across the board for stats and a hidden ability of Grass Pelt and I'd still use the crap out of it. I figure at worst it will be a decent anti-Grass Grass threat. I can also see the little guy getting 17 Speed too.

Also, is nobody getting a Purrloin V2 vibe from Litten? I would bet irl money on it getting Prankster as its HA along with the typical Dark-type support pool; Nasty Plot, Taunt, Knock Off, etc. Doubt it will become top-tier LC without some good stats and an above-average move pool even if it got Prankster though.

Really don't have an opinion (read: give a crap) about Popplio.