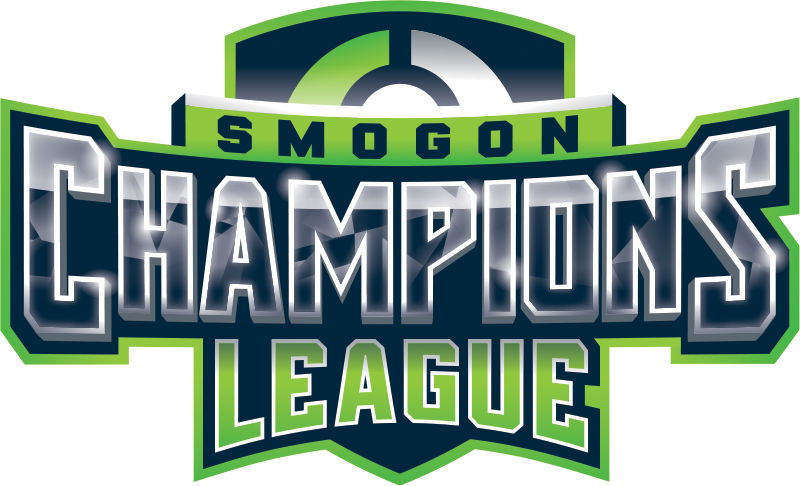 If you wish to play in the Smogon Champions League, you must sign up in this thread. The Smogon Champions League is an 11 week event at minimum, and has the potential to stretch on a bit further depending on tiebreak situations. Only sign up if you can be active for the majority of this time, as a high level of activity is expected. This includes several things, such as communicating with your team and getting your games done, and maintaining a competitive attitude even after your team has already been eliminated. It is in your own best interest to show off your best side. For general guidelines on what to do and what not to do, refer to Luigi's guidelines here.

A reminder of rulings relevant to player signups that hold true for this year:

If you wish to sign up, please use the following format:

It is absolutely pivotal that you sign up using the above format, as we will use an external tool to parse signups and push into the spreadsheets. If you have anything else to say or wish to shitpost, do so in the commencement thread!

>>Signup Sheet<<
Courtesy of the wonderful and amazing Ticken

This year's managers will be:

If you are interested in playing, be aware that any team may buy you, and you are expected to play for any one of them. Only list tiers in your signup that you are willing to play. These signups are binding for almost the entire tour, they will affect how the managers will see you, and you are expected to play them if necessary. If you would not consider seriously playing a tier in a tournament, do not list it. Do not make dumb joke posts about playing tiers you don't care for.

(NEW) For the duration of SCL's regular season, players are only allowed to play in the tiers listed in their signups post. Players will only be allowed to play a tier they did not sign up for starting in playoffs. We will not be enforcing this rule for anyone with a price tag of 4k or lower. This is intended to address price fixing and encourage players to sign up for tiers they are most skilled in, rather than attempt to reduce their auction price.

You are generally expected to participate in your team's Discord. While we understand that activity levels may vary, this is the core portion of SCL, and what makes it fun. Your team's Discord server is where your team will hang out, discuss strategies and just have fun without worrying about the game. This is where teams come together (or fall apart), and likely the most integral part to the entire tournament.

For everything else, refer to the Commencement Thread. Have a great season, everyone!
Last edited by a moderator: Aug 28, 2022

i'm what you get when the stars collide