Head TD
For when this invariably becomes necessary. Various rulings from prior tournaments can be found in the hide below for ease of access, as always the general tournament rules and guidelines are in effect as well.

Auction has been scheduled for Saturday, August 28th at 6:15 PM EDT (GMT-4). Signups will close 24 hours prior to auction start. 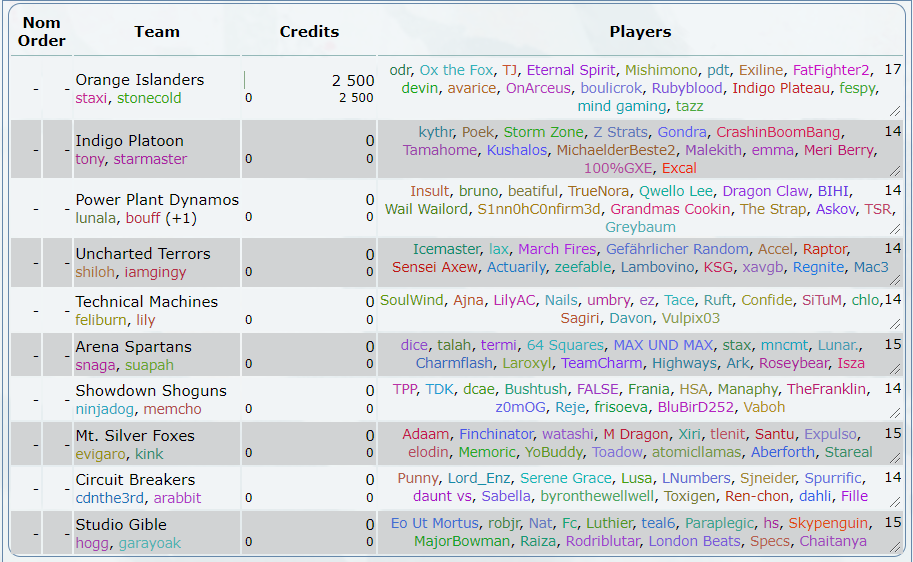 Head TD
August tier shifts have been announced. The changes will be in effect for SCL I Week 1.

Following the UU Council vote, Arctozolt will be banned from SS UU and all tiers below UU in this tournament, effective next round (Week 2). It will remain legal for the remainder of Week 1, and as such Smogtours will not be updated to reflect this change until the start of Week 2.
Last edited: Sep 8, 2021

RU banned Durant prior to the start of Week 2. As such, it is not legal to be used for RU games in Week 2 of SCL.

Head TD
October tier shifts have been announced. These will not go into effect until the start of Week 5.

Similarly, quickbans and unbans which happen prior to the start of Week 5, such as UU's unban of Latias, will only go into effect starting Week 5.

For clarity, the full list of council actions that are in effect for Week 5 are UU's unban of Latias and NU's quickban of Regidraco and Snorlax.
Last edited: Oct 3, 2021

Head TD
Re: Sagiri vs Santu

During Santu and Sagiri's game yesterday, Santu timed out. Prior to running out of time and afterwards, Santu claimed that the simulator was not registering when they selected a move, and that their attempts to fix the issue by reloading the battle did not fix it either time they tried.

The host team agreed to a recreation under the assumption of a simulator glitch, as Santu's behavior in the battle log lined up with their claims, it was both early in the battle and Santu had a fair amount of time remaining when they claimed to be experiencing issues, Santu stated their issues with the simulator accepting their moves in battle chat before timing out, this is an infrequently reported but not unprecedented glitch, and a quick recreation would not provide a significant advantage to either player.

I personally failed to perform the recreation correctly and put Santu and Sagiri in the wrong playing positions, resulting in a team leak. The responsibility for this failure is on me alone, not on any actions made by Santu, Sagiri, or any fault of how recreations are done. Due to this, a fair recreation was no longer possible.

At this point, alternative options such as forcing a rematch with different teams require a higher threshold of proof that the simulator was glitching. As Santu was unable to provide conclusive evidence that they were experiencing a true simulator glitch, the host team is forced to rule as though it did not actually occur. Since Santu's normal timer ran out, Sagiri is given the win by timer.


Re: March Fires vs Skypenguin

During March Fires and Skypenguin's game today, March Fires timed out. After the battle ended, March Fires claimed that the simulator had caused them to time out despite having selected a move.

Skypenguin is given the win by timer.

The dev team has been notified of the elevated reports of simulator glitches that leave players unable to select moves. The host team would strongly recommend that all players be aware and to please quickly take a screenshot showing the issue if you experience this, both so that the host team can make an appropriate call and so that the development team is able to more accurately diagnose and fix the issue.

Head TD
RE: Santu vs Sagiri 2

During the previous week's match between Santu and Sagiri, Santu timed out at turn 7, which according to him was caused by a simulator glitch. The original decision of the host team was to not consider this a timeout because of the possibility of said glitch, due to Santu's actions during the game. However, after reviewing the situation further with the wider TD team it was determined that this will be ruled as a normal timeout. Appeals for recreations due to simulator glitches will not be considered, unless it is proven to be a known/frequent bug that has been announced as an active issue via the administrative decisions thread while our wonderful development team is fixing the issue.

We want to apologize to both the Foxes and Santu for the inconveniences and false hope the recreation attempts and the original decision gave. The TD and host team will review what happened and get everyone on the same page so that these mistakes won't happen in the future.

Again, we want to offer sincere apologies to the Foxes and Santu for the original decision.

Following the UU council vote, Latias will be banned from SS UU effective next round (Week 7).

NU has unbanned Snorlax. This will be in effect starting next round (Week 8). Snorlax will remain illegal to use for the remainder of Week 7, and as such Smogtours will not be updated to reflect this change until the start of Week 8.

100%GXE brought Latias, a pokemon that has been quickbanned from UU and was explicitly banned for Week 7 as per this post. Highways is awarded the victory.

Head TD
RE: Xiri vs Rodriblutar

Rodriblutar missed the scheduled time and Studio Gible did not provide a substitute before Xiri left.

Head TD
RE: 64 Squares vs Aberforth

64 Squares chose not to play and no substitution was provided by the Arena Spartans.

RE: Confide vs Meri Berry

Neither player fulfilled the requirements for an activity win.

mind gaming called activity and the Power Plant Dynamos did not contest the claim.

While the Dynamos managers did not contest the activity claim, Insult did, and it emerged that mind gaming did not follow the guidelines to earn an activity win in their entirety. The previous decision is overturned.

Due to the charity bowl, the Smogtours server requires an update. This means that the SS UU and SS PU formats on Smogtours will be updated to include the recent bans. As such, the UU and PU games remaining in SCL must be played in the tier directly above so that Kommo-o and Drampa respectively remain legal.