Kris said:
NFE recently had Terastal Clause implemented on PS; however, it’s still legal for this round, so make sure people are challenging in NFE with /chall [user], gen9nfe@@@!terastal clause
Click to expand...

Same deal with AAA and Fur Coat/Ice Scales, make sure to challenge in AAA with /chall [user], gen9almostanyability@@@+furcoat,+icescales

Steven Stone 007 said:
I have downloaded the replays so please tell me how to upload
Click to expand...

send them to me on discord @ Clas#0024, ill send video links to you and then you add them into your winpost

Clastia said:
send them to me on discord @ Clas#0024, ill send video links to you and then you add them into your winpost
Click to expand...

group 27, calling act on death of mimikyu.
they missed our scheduled time and never replied to me after that, check their profile for details.

Group 9, Frixel gave me w (proof on my wall). GGs to my group

Calling act on martinvtran. We have a roughly 17 hour time difference and our schedules just never lined up despite us scheduling for Friday the 20th. To follow that up, they bumped it Monday night after us not being able to be at that scheduled time on Friday and I asked them first thing Tuesday morning what time they were thinking to which I have gotten no response and it is now Thursday night :/ I unfortunately don't think there will be a good time for us between now and the deadline so wanna put this out there before I forget.

Social Media Head
Greninja and its prevolutions were released today; however, they won't be usable (apart from BH) until next round.

So you have chosen, Death

Was given win vs Bossaru

calling act on nick, got no response after posting on his wall twice

Group 14.
Calling act on TTV_DarkAngel25 and blackxavi. Both don't respond and they were last seen two weeks ago.

group 22, calling act on sandanlp. had to wait over a week for them to get back to agree on a time, and didnt show up after waiting a full hour. wouldve posted at the time but someone asked for help in omm just before the full hour and forgot about it until now (i was also on that day able to play until 2am my time, we scheduled for 9pm)

my opponent gave me permission to rebut this, so i will call act on kennukem himself.

he firstly gave me his availability as "Wednesday through Friday 7am to 4pm, and Saturday and Sunday 7am to 2pm [GMT-6]", where we first agreed to 7am Friday. however, at scheduled time, he failed to show up to scheduled time and that he wouldn't be free for another hour or so. 7am his time was 12am my time, and i had to wake up early the next morning, so i didn't have a lot of available time to wait around. i waited 1.5h-2hish, without him showing up, so i texted goodnight and attempted to reschedule to another day, to which i did not receive a response for 5 days.

yes, i admit i am at fault for not replying to him for 3 days (which was his argument in his act claim), but that was because i was on vacation. i should have told him, but i didn't because he listed he had availabilities on the weekend and there was 5 days yet until the deadline and i thought i could just play then.

kennukem said:
I unfortunately don't think there will be a good time for us between now and the deadline so wanna put this out there before I forget.

i think this is disingenuous to his original scheduling post stated he was free "Saturday and Sunday 7am to 2pm". in a desperate attempt to make things work out, i am willing to sacrifice sleep and everything to make this battle work because our time differences are tight. however, i feel like my effort has been unmatched and his scheduled had suddenly changed last minute, claiming he only listed 7am as "only because I have to go to work" however he could only play in the 7am to 2pm time frame "if he is free". i doubt that this is effective scheduling as i would expect my opponent to be free in the time frame offered. even after discussing with him, i am not understanding how he claims he is only available 7am-2pm, but even in that time frame, he is not actually available. so why offer it? i appreciate trasparency and clearly telling me his availability instead of, in his words, "hit or miss". since i was on vacation, it has been exceptionally difficult to stay up to try to adhere to 7am-2pm (12am-7am my time) when there is no guarantee he will even show up. i am really tired of staying up on multiple nights just to try and catch him in the OM room, and he ends up not being free in this time at all despite me asking the room where he is. additionally, my opponent has had a lot of time to spend insulting me and saying he is entitled to not battle because he "has a life" rather than focusing on trying to schedule a decisive battle. 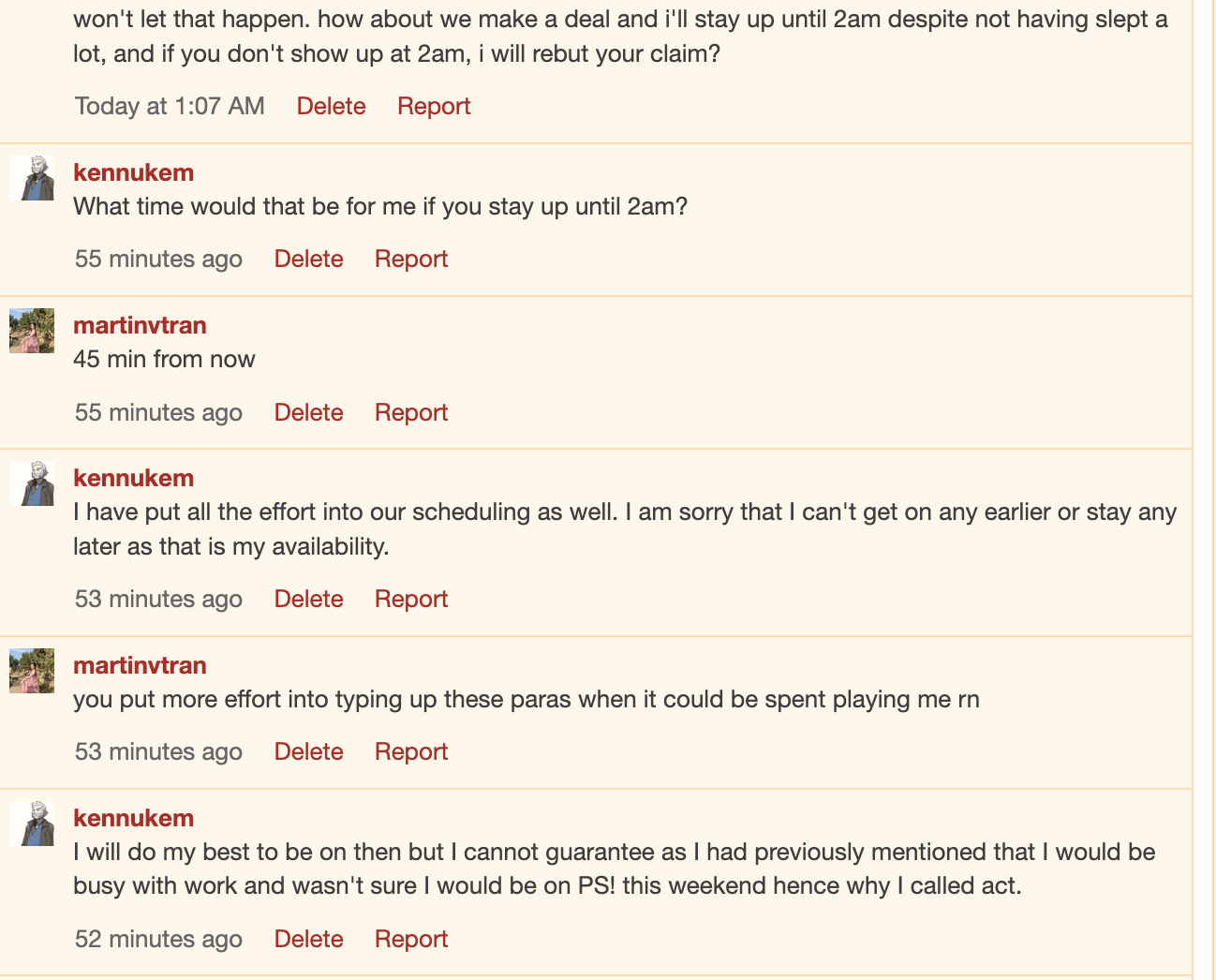 in a final attempt to schedule, i offered to wait just until 2am (2 hours past the initiation of our convo) otherwise i will call act, and he seemingly agreed, yet he didn't show up and told me to wait another hour.

tldr; in my opinion, this is blatant and disrespectful act fishing when little effort was contributed by my opponent and it should not be rewarded. he offered a time frame that is exceptionally difficult for me (12am-7am) and i tried bending over backwards to stay up for it multiple nights, just for him to not show up because turns out not even him can make that time frame despite offering me it!!!!!
Last edited: Jan 28, 2023

martinvtran said:
my opponent gave me permission to rebut this, so i will call act on kennukem himself.
Click to expand... 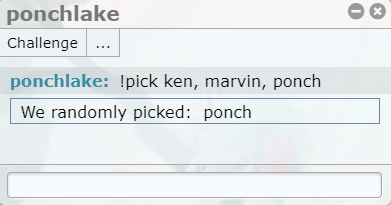 after much discussion, we've decided to resolve this matter with a coinflip. and as you can see, coin does not lie. I will be getting the act call for this situation and am now 4-0 in pools.