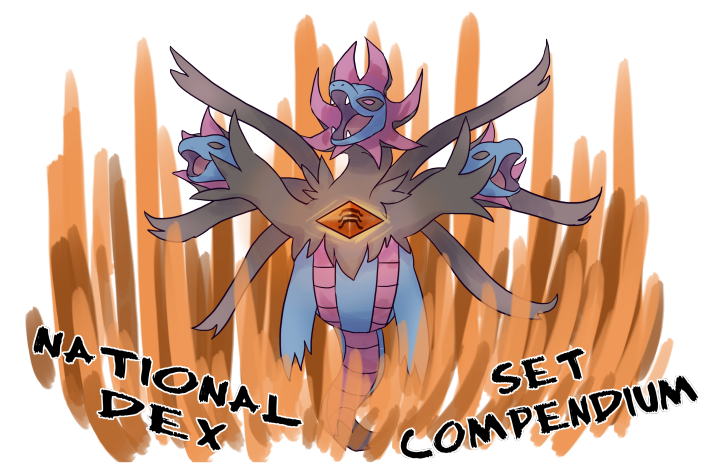 ​
Welcome to the Natdex OU Set Compendium! The goal of this project is to provide a collection of the best sets for Pokemon listed in the Viability Rankings in order to ease the teambuilding process and help newer players get started. Note that this list is by no means exhaustive, and there may be viable sets outside of the ones listed here. Also, the moves, item, and EV spread of each set can be customized freely to fit your team's needs.

If you would like to see set(s) from the compendium added, removed, or modified, please leave a post here indicating which ones. I will be checking this thread for responses weekly in order to ensure that the information is up-to-date. If you wish to add a set, please make sure that the Pokemon in question is listed in the Viability Rankings, and provide justification such as replays or an explanation of how the set functions if it does not have significant ladder usage. Pokemon outside the Viability Rankings may be listed but it must be backed up by extreme explanations as to its role in the metagame and what niche it would have to warrant it here.

Kommo-o's SpD spread has 116 SpD and 140 SpD next to each other. Is one of these supposed to be Speed EVs?

Discord Leader
This resource has been revamped for the current meta!

As always if you feel a set needs a change of some sort be it addition, removal or a simple change don't be afraid to suggest as such. And make sure to read the OP before posting.

Hello! I'm here to suggest some changes as I believe this is a really cool resource.

Aegislash: Include Head Smash as an option on band, this serves an important purpose in 2hko'ing Toxapex and OHKO'ing Zapdos.

Xard: 3a should be an option, common on hyper-offensive teams due to the extra coverage making it far harder to wall, at the cost of longevity.

Clefable: BoltBeam should be an option on Calm Mind sets, winning Calm Mind wars against other Clefable in conjunction with perfect coverage makes this a potent option on balanced teams.

Corviknight: Iron Defense should be slashed, this is preferred on stall as it's easier to beat wallbreakers such as Mega Mawile and Hoopa-U.

Mega Diancie: Encore should be slashed on the same line as rocks, since locking things like Corviknight into defog and such is good.

Dracozolt: mixed should be the only set here, full physical is kinda bad due to being walled by staples such as Landorus-T.

Excadrill: SpDef should be a separate set from SD, they simply function differently.

Greninja: WaterZ should be removed, never seen anyone seriously consider putting that on a team.

Mheracross: Bullet Seed should be slashed alongside Pin Missile / Sub, being able to threaten Tapu Fini is great considering it's presence in the metagame.

Kommo-O: Rock Slide should be slashed alongside protect and EQ since it allows you to kill yard instead of trading.

Mew: Slash Colbur next to lefties, allows you to set-up spikes on more things.

Scizor-M: Bug Bite should be slashed as an option next to Sand Tomb / Knock, literally on the webs sample, nukes neutrals.

Serperior: Include SubSeed sets, being walled by steel-types is suboptimal however the extra longevity and it being a general annoyance gives this set a solid niche.

Weavile: Remove Life Orb and Groundium-Z as options, there are some major flaws that come with using these, being 0 longevity, and losing a coverage move / secondary stab respectively.

Great Resource, glad it was updated

I am just cold metal

This spread should be 56 Def / 204 SpD Calm imo. This spread is much better Ash-Greninja check overall while still easing matchups against Pokemon like Kartana and Rillaboom.

I think you can unslash Taunt and slash Body Press next to Brave Bird. Taunt doesn’t really have much use thatSubstitute wouldn’t especially on sets without Defog. Body Press goes well with Iron Defense on stall teams as well.

Imo you can change slot 4 slashes to Power Whip / Body Press / Thunder Wave / Toxic. I find Protect and Gyro Ball to have very little use (Gyro gets pp stalled by Clef and Kyu lol) and this reduces the clutter a bit.

I find very little reason to run Stone Edge. It only really hits Zapdos, and +2 Scale Shot chunks it anyway even with unfortunate rolls.

See Mega Garchomp above. Stone Edge should probably be moved to the back — Substitute turning Pokemon like Defensive Landorus-T and Ferrothorn into setup fodder is enormous.

Flash Cannon has very little use outside of slamming Fairies, who are often hit hard by Groundium Z anyway. In return, it makes situations against Heatran much more dicey, which is not something you want.

I would reorder the items to Life Orb / Colbur Berry / Fightinium Z. The only real help Rocky Helmet provides is against Tyranitar. I would also switch Focus Blast and Acid Armor around.

After a few discussions with Avery, I think SD / BP / Superpower / Dual Wingbeat is the best in terms of coverage, but I don’t know too much about the best matchup spreads so I would ask them about it.

Imo I think LO Weavile can stay. It only really fits on super offensive teams with Excadrill/MDia leads but the payoff is incredibly, such as OHKOing Rillaboom and Corviknight at +2.

I think Close Combat should be slashed with Knock Off, as Toxic’s ability to cripple Tangrowth, the Latis, Lando, and Chomp is really beneficial. Knock Off, while awesome, simply isnt as mandated here as it is in Galar, and Close Combat can let Zeraora revenge kill Pokemon like Kartana and Excadrill.

don't save her, she don't wanna be saved

hwish added as an option

myst fire slashed next to encore/rocks, as 4a is good too

remove norm z from spdef set, weird mention considering its normal move is spin, and mention mbreaker as an other option for ability outside of sand; also mention lead drill

scarf potentially as a set mention, w the rise of mchompers i have seen some use for it, might be explored more in the future

darkinium as an option, draco slashed next to flash and ep bc draco dark is rlly hard to deal w imo

frustration>knock off on band, life orb as a potential option on sd

protect before eq, the passive healing + scouting is much better than hitting gengar and clown, + with mag gone this is less useful

toxic as an option on mana

for sd, 140 speed is rlly the speed tier that should be used (no speed corv) , no skarms run 0 speed, for ffang set it should run 204 for sciz, and make brick break a tertiary option along with the other 3, remove sub punch mentions, mention focus in the standard 4a as an option too

possibly adamant as a secondary nature, bullet punch as an option

pads melm listed as an option

for spikes mew, add eq as an option, and a spread like this
Mew @ Colbur Berry
Ability: Synchronize
EVs: 248 HP / 76 Def / 112 SpD / 72 Spe
Impish Nature
- Spikes
- Roost
- Will-O-Wisp
- Earthquake
add port as an option too, and boots as another item option

spower before tomb on 3a, curse listed as an option on 2a

add water z as an option on cm, remove lefties (or at least change it to sludge lol), add other move options on cm (scald/flame), on av imo this spread is better to check tran, kyu gren and add focus blast as a move option

evs are messed up, looks like a mesh of last gens set and my new one, this is the proper set, also should be rock / fight z on this, lefties on the purely spdef set
Tapu Bulu @ Rockium Z
Ability: Grassy Surge
EVs: 220 HP / 96 Atk / 48 SpD / 144 Spe
Adamant Nature
- Swords Dance
- Stone Edge
- Close Combat
- Horn Leech
(idt you should list synth/tect as an option here either, and sp is from last gen)

reorder of optional moves, toxic>knock(both can be swapped depending on your preference)=tspikes>bunker, bunker is by far the least useful out of the 4

hp flying removed as an option, volt removed, possibly added on thundy i if that gets added

super power as the main option for 4th optional move

hp ground as an option with buzz, psychic is much more needed, esp with z, hp ground only really hits tran

defensive zap using the 40+ speed spread, volt listed as an option, offensive with defog as an option over wball

WHEN I FLEX, I FEEL MY BEST!

Moderator
I suggest a spdef hippo spread (max spdef) alongside leftovers, which allows it to check MDiancie and CharY while setting sand against Pelipper.

EDIT: Also mayyyybe add skarm creeping band ttar? I think 0 speed exists as well but unsure about that one
EDIT 2: Also ice punch over the protect slot on melmetal is nice to catch Glisc after rocks
Last edited: Jun 21, 2021

don't save her, she don't wanna be saved

GOOD MORNING everyone, this resource is finally updated again, feel free to suggest any changes / additions / removals, although please read the OP before posting^^

Some Real Sets for HO

hi, asked to make an updated compendium and was given permission, so here u go
ive checked over the viability rankings to add pokemon, and also added sets that are now used in recent meta
let me know if i missed anything / need to fix something!

hidingflames said:
hi, asked to make an updated compendium and was given permission, so here u go
ive checked over the viability rankings to add pokemon, and also added sets that are now used in recent meta
let me know if i missed anything / need to fix something!