here is this week ccat team result: https://pokepast.es/6a0b30be4da70110 (with the core owner permission we changed gren and reuni evs)

thanks everyone for partecipating and i hope to see yall again next week!

greninja: gren is our speed control of the team, 80 spa is to guarantee one shotting kartana and the rest is standard for a physical gren set

reuniclus: it outspeeds toxapex, one shots heatran after a calm mind with the Z and rest is hp and def which makes it live a choice banded weavile knock. its our wallbreaker

heatran: bulky tran not much to say the set is standard as its our rocker

lopunny: our fast physical attacker that likes to click buttons. pretty good mon nothing special to say about it

tangrowth: we needed some checks for rillaboom, kartana, gliscor with hp ice and other things so its there to help tank some threats. set is standard

So uh. This might be a little too silly but I'll submit it anyways. Basically I have, over the past day, realized that SubSalac Primarina has a lot of actually really nice traits for HO teams.

1: It's probably HO's best answer to Ash Greninja. The only other mons I can think of are AV Lele and Tapu Fini (but that's a late-game wincon, if it comes in earlier than that you lose a lot of momentum.)

2: It can force Pex into a Haze/Recover Loop w/ CM + Stored Power, making it easier for Pex-weak teammates to effectively dispose of it. It can lure in Pex w/ Psychic and 2hko it as well if it doesn't expect it.

3: It can CM multiple times on non-Giga Drain variants of Volcarona, this mon can be a pain for many hos as even successfully out-offenseing it can be difficult without risking a flame body burn.

4: The speed tier is arguably not great even after a boost but you still outspeed crucial speed benchmarks, like Serperior, MLatis, and Garchomp.

Getting walled by common defensive mons like Ferrothorn and Mega Latias (on Psychic/Stored Power) sets sucks, but keep in mind that Torrent is a big boost, you still significantly weaken a lot of the mons that answer you. 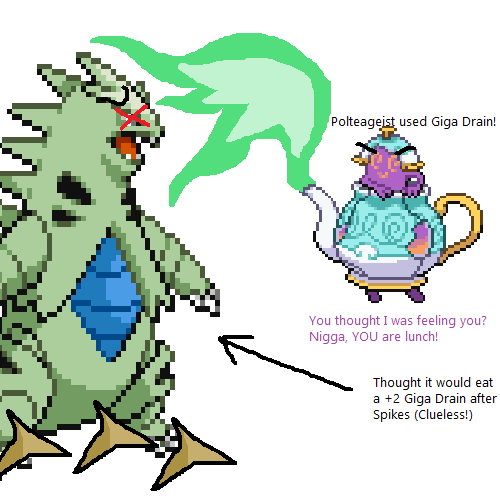 v good mon lately imo, it just shell smashes and obliterates through teams with spikes. lele can be a cool mon to run with it due to priority negation + stored power being boosted
Last edited: Oct 31, 2022

Heal bell or healing wish on mlop allows it to support it's offensive partners. Healing wish allows it to bring a partner back to full health for a second sweep, while heal bell allows it to remove annoying burns and paras.

the most common mmane answers are heatran, chans/bliss, mtias, all hate taking knocks and pursuits from weav. pretty simple.


Rotom-Wash @ Leftovers
Ability: Levitate
EVs: 252 HP / 200 Def / 56 Spe
Bold Nature
- Hydro Pump
- Volt Switch
- Pain Split
- Will-O-Wisp / Defog
Rotom Overview: Washtom is incredible for shutting down Mega Swampert with Will-O-Wisp. Despite losing leftovers from Knock Off, Pain Split is sure to keep it healthy from opposing pokemon. Rotom has a niche with Electrium Z / Waterium Z as well for other opposing mons that beat it (Providing below)

For this CCAT, we built around the incredibly dangerous and threatening Polteageist. It's a Shell Smash sweeper that uses nigh-unwallable Ghost-type STAB and Stored Power to blast past virtually any Pokemon, bar Hydreigon, Tyranitar, and other miscellaneous bulky Dark-types. Ghostium Z, however, lets it potentially break past them with the most minor of chip, along with other walls like Heatran. Tapu Lele is generally a good partner for Polteageist, powering up Stored Power and providing powerful protection against priority from Mega Lopunny, Weavile, Mega Medicham, and Mega Scizor. Landorus-T is a natural fit on teams like this, providing valuable pivoting, entry hazard removal, and other incredibly valuable traits. Mega Lopunny offensively checks Dark-types that Polteageist struggles against and provides valuable speed control as well. Clefable is one of our entry hazard setters and is able to compress that + Healing Wish support, making it harder to wear down the entire team. Ferrothorn rounds out the team by improving our overall rain matchup and providing Spikes, which are helpful in wearing down Dark-types for Polteageist and other Spikes-weak Pokemon.

Submissions are open for the new week!​

pair this thing up w/ any physical attacker checked by lando and you already have a rly deadly core. this + kart goes hard but you can try other mons too
Last edited: Nov 6, 2022

pair this thing up w/ any physical attacker checked by lando and you already have a rly deadly core. this + kart goes hard but you can try other mons too
Click to expand...

Thundurus can abuse Defiant similar to Bisharp and Zapdos-Galar but has a much easier time switching into defoggers. Its unaffected by Earthquake from Gliscor and with the Z it doesnt care much about Knock Off either. It also takes Brave Bird from Corviknight alot better than Bisharp or Zap and can threaten out Fini immeadiatly. Besides that Flynium it an absolute Nuke and allows it to blow past p much everything hit neutrally by the move. Bulk Up allows it to setup on something it threatens out. On top off that is has a p nice speed tier and typing. This could be used on Webs or Spikestack

Thundurus can abuse Defiant similar to Bisharp and Zapdos-Galar but has a much easier time switching into defoggers. Its unaffected by Earthquake from Gliscor and with the Z it doesnt care much about Knock Off either. It also takes Brave Bird from Corviknight alot better than Bisharp or Zap and can threaten out Fini immeadiatly. Besides that Flynium it an absolute Nuke and allows it to blow past p much everything hit neutrally by the move. Bulk Up allows it to setup on something it threatens out. On top off that is has a p nice speed tier and typing. This could be used on Webs or Spikestack
Click to expand...

Might wanna consider agility to help w/ getting rkilled

I think of this more as a breaker

We had built around an admittedly unviable, if not niche Pokemon in Durant. While it currently isn't the best choice as of now, it carries an incredibly strong Attack stat that's further compounded by Hustle, with Hone Claws + Electrium Z letting us bait and destroy bulky Water-types like Tapu Fini and Toxapex. It does, however, lack utility as a Steel-type, and fails to really accomplish much defensively. Nonetheless, we had most likely shored up its weaknesses somewhat well with this team. Victini gives us a reliable way to bring in Durant, as it can't switch in on its own. It also pressures checks like Landorus-T and can use Toxic to cripple it and Mega Latias and Rotom-W. Tapu Fini perfectly takes advantage of Durant and how it baits Toxapex, becoming a dangerous wincon when its checks are removed from the picture. It also gives us some leeway vs. opposing Weavile. Landorus-T just gives us solid role compression; a pivot, entry hazard setter, Electric-immune Pokemon, you get the picture. Mega Lopunny heavily appreciates the aforementioned team members pressuring its checks, and also gives us another safe way to bring Durant in to wreak havoc. Weavile similarly appreciates how the rest of our team pressures its checks in Mega Scizor, Toxapex, and Tapu Fini, as well as being able to trap and directly remove Mega Latias.

Submissions are open for the new week!​

this set is fun, evs ensure you are 3hkoed by mpert waterfall in rain after rocks. there's v little to justify this but at least washtom is still a good pokemon
Last edited: Nov 13, 2022

Probably gonna be some stall team, tho ig u could build some ho around it.

shadow ball provides better neutral coverage, while nothing is immune to dark

Toxapex can handle triple axel from Weavile's Triple Axel, unlike Latias. Toxapex can really eat a Greninja's specs Dark Pulse and a Groundium Z Dig at low hp, but shrug that off with its ability regenerator. Pex Only loses to Mega Scizor with the move Sand Tomb. If it doesn't have Sand Tomb, Mega Scizor can't do a single thing and Pex can prey for a burn.

Latias wars against Landorus/Gliscor/Chomp with an unexpected Ice Beam that OHKO's, even without evs on it. Urshifu Rapid can't fight against it, same with a shit ton of mons.​

This can potentially be scary on hyper offense compositions once speed control is removed from the opponent's team.

Moderator
Due to the recent release of the Pokemon Scarlet and Violet games, I'll be putting CCAT on a hiatus for now. We need time to figure out the metagame and such; I'm very thankful to all that had stuck around to build these (questionable, but funny) teams! Here's to another amazing generation of building!