this has been one of my more successful teams and is really fun to play with. it has the ability to win in a lot of different ways because of how well balanced it is and can really control the momentum of games with a little bit of practice and prediction. I originally started this team with the plan to try for a ceptile sweep, but I eventually removed him and made some adjustments to make it more ou competively viable and to give it some more survivability.

What rain team would be complete without the rain summoner? Originally i went with a defensive politoed but i changed it to the choice scarfer to give the team some more fire power. Hydro pump is the STAB of choice, and is absolutley fearsome in the rain. Ice beam lets him revenge kill dragonite, the lati twins, salamence or garchomp, all of which he outspeeds with the choice scarf. Focus blast, while unreliable, 2HKOs ferrothorn in the rain. Perish song has several uses, being stopping set up sweepers, finishing off final, tricky pokemon like jellicent, or absolutely ruining baton leads day.

The teams main special wall, he is also who i predominantly use as a lead against other weather teams. He can relably set up a stealth rock, and earthquake 2HKO tyranitar and 1HKO ninetales while he is able to survive a energy ball and, in some cases even a solar beam. He is also a hard counter to any jirachi that lacks body slam, while also being able to beat those if the paraflinch fails. Waterfall is to be used inside rain for extra power, and toxic is to deal with stall mons like jellicent or gastrodon. His electric immunity is also great to support the other members of the team, 3 of which have an electric weakness

What can I say, Skarmory is amazing. He sets up hazards, phases, and has reliable recovery. The teams main, and really only physical wall, he is truly invaluable when dealing with the ever prominent scizors of the world. Brave bird is mainly so that he isnot taunt fodder, but is also useful when dealing with conkeldur, breloom or toxicroak. The rest of the set is really self explanitory. set up hazards, roost, and phaze for residual damage. 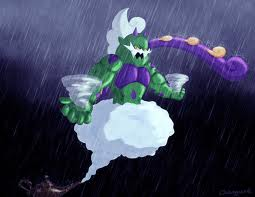 With a base special attack of 125, specs, Stab boost, and perfect accuracy in the rain, hurricane is a force to deal with. It at least 2HKOs every pokemon in OU, with the exceptions of Jirachi and Heatran and tyranirtar and other bulky rock types in the sand, who are dealtwith by heat wave and focus blast, respectively. U-turn is mainly for keeping momentum, but, in general, the other 3 moves aren't used much. This guy was built to sweep with hurricane, and that is what he does.

Celebi is the secondary special wall, and with calm mind, can be extremely hard to bring down. It is the main counter i have for starmie, which otherwise can present problems for the team. Giga drain is the attacking move, recover provides more reliable recovery outside of giga drain. baton pass is primairly used to escape pursuit users, but every once and a while, he can get a complete set up off ferrothorn or heatran in the rain and pass the boosts to politoed or tornadus to clean up the game.

I don't have a rapid spinner as, other than tornadus, none of my team is particularity vunerable to hazards, but i did find myself struggling with toxic spikes stall teams, so i brought in toxicroak to remove them while being able to do some damage on the physical side, also something i lacked. The speed Evs let him outspeed breloom, most gliscors, and some dragonites, all of whom are dealt with by ice punch. Swords dance boosts his already very good attack. Drain punch, in combination with dry skin and black sludge gives excelent recovery, while sucker punch gives the team some much needed priority and allows him to be able to counter latios or starmie.

-Starmie: avoids a OHKO from an unboosted sucker punch and can really tear the team apart with max speed, as it will outspeed tornadus. I really rely on Celebi for it
-Jirachi- Para flinching jirachi that carrry body slam can wreak havoc on the entire team, while only swampert can wall the other variants.
Weather teams-with politoed choiced as as such outspeeding other weather summoners, other weather can crwate problems due to tornadus and toxicroaks reliance on rain. (sun in particualar is difficult) Winning the weather war is quite important and is something i always ensure I win it throughout the game.


Some replays if you want to see the team in action

this team has been extremely successful, with excellent balance, and a very effective defensive core in skarmory, Swampert and celebi, who all; compliment eachother very well. Similarily, Toxicroak and tornadus provide an effective tandem in the rain, complimenting eachothers weaknesses well particularily relating to tornaduses ground emunity and toxicroak being able to absorb rain boosted hydro pumps.

Moderator
great team! not much to change really, but an opposing tornadus looks like it could be a big problem. I'd suggest running specially defensive skarmory and physically defensive swampert. One other thing, I'd try psychic over focus blast on politoed, as its a nice surprise for a mon who could be an issue with that above change if swampert gets weakened. focus blast also is unreliable b/c it relies on prediction, 70% accuracy, and doesnt even 2hko spdef ferrothorn.
You must log in or register to reply here.
Share:
Reddit Pinterest Tumblr WhatsApp Email Link