Icemaster said:
(unless you've posted in this thread)
Click to expand...

What's wrong with the people who have posted in this thread? This seems kind of unfair.

True, like we need rights too! We can also just delete our posts then get it. Get rekt geysers

I will finish the AGL tribute (revision 2) 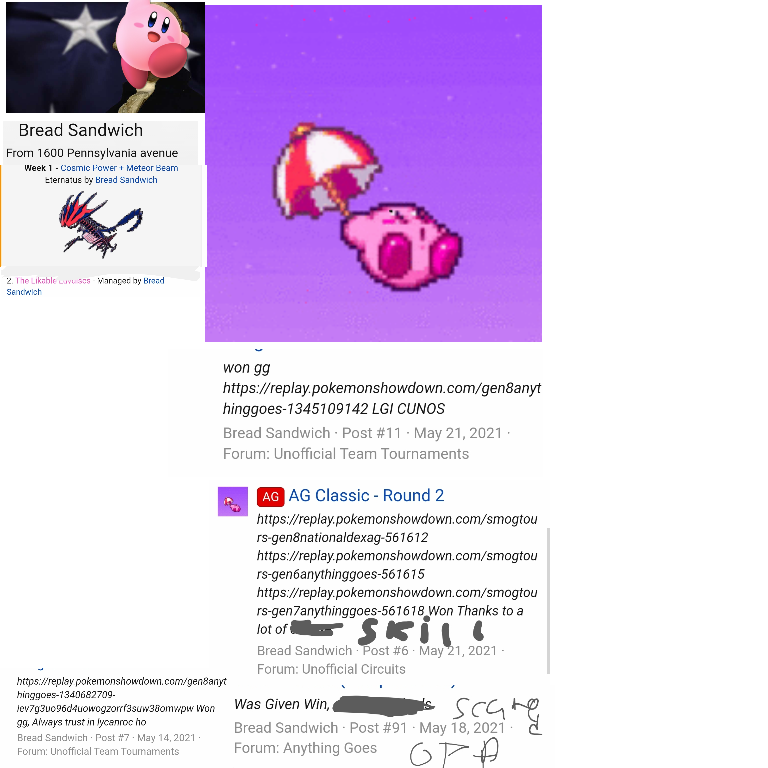 Shivam3299 said:
"Presenting you the undisputed and undefeated team of this entire universe "
View attachment 348818
Team Name - Derek Clan Dinosaurs
Regular members- Frozoid WSun1 Fc Kate cromagnet (we are looking for new members , feel free to contact Sukon or WSun1 )
Now lets us introduce you to our undefEated team that made this impossible task of winnng AGPL possible
Captain- Bobjoejuan ( HAIL BOBJOEJUAN)
THANK YOU FROZOID FOR HELPING IN WRITING THIS POST.
Click to expand...

Can u tell me how much was a bought for in the mock auction... Just wanna know? LOL

Can u tell me how much was a bought for in the mock auction... Just wanna know? LOL
Click to expand...

So Are there discord servers for the teams?

RuthlessDragon6 said:
So Are there discord servers for the teams?
Click to expand...

they are posted on the previous page if u scroll down

This is the main takeaway from that mocc.

pricelist we did mocc 4

highly requested(not really) ag pr!! gonna do the top 8 for all the tiers. gimmie likes for the effort, i was forced to make this. (not including managers) this is just my opinion no hate please

Oras
1. MZ - most people will probably disagree with this, but mz got the experience and teams to beat pretty much anyone in this draft. as the oldest active oras player, he deserves this spot. I'm assuming will he kind of try a little bit for this agpl as well, and thats all he has to do to go positive in this slot

2. Zayele - recent oras cup winner here. solid builder and player here. one of the few who you can just slap here and trust in making some teams independently.

3. Chloe - one of the best of oras but really doubt she will put any effort in this. despite that tho, it has not stopped her from having extremely good w/l in numerous ag team tours where oras was featured. this is another slot where you can just leave her alone and not worry about teams.

4. PurpleGatorade - another old time oras player. most likely will be playing another slot, but he has the skills and teams to go positive here. doesnt really require that much support.

5. Highlord - from my experience with highlord last agpl, he has a very firm understanding on oras ag, and is able to create some dope teams. putting him at 5th cause we still havent seen much from him, but i know he has the tools to do very well. another slot where you can trust him in building teams, but having an extra player who is familiar with oras could be extremely helpful.

6. Skarph - you pretty much slot this dude into anything and can expect a heat team with high level playing

7. keys - coming off of an amazing record in ag snake, dream can duke it out with the best of ag as far as plays go, but you will need to support him with some teams i think.

8. Satanic Beast - underrated oras player with not many tour achievements as of yet, but anyone who knows them can tell u they are very good at it and can be trusted in buillding(i think) and playing at a high level.

2. Dockiva~~ - used to call him very underrated but i think everyone has realized now that dockiva is not someone to fuck with. usually solid performances in team tours, usum cup winner and etc and etc. very solid player overall who always pulls up with the brokens. now that he mixed ho in his arsenal, defo a hard player to prep for ;;

3. baconeatinassassin - put him below dockiva for one reason only, his teams ;; i rate bacon extremely highly, but fsr this seems to be exclusive to usum, BUT his teams just don't necessarily look that solid, or i should say consistent. could be just me being bad at usum but yh, skarph and dockiva utilize the brokens extremely well and idk if bacon can match those two in this department. this does not mean he cant beat both their ass tho, just saying it can be more of a toss up

5. MZ - usually weird teams but they always work under him. excellent record from latest ag snake and is one of the oldest sm/usum players. cant go wrong with him

6. PurpleGatorade - very solid and long time player. idt there is much to be said. ranked him at 6 cause i think he might still be a little bit rusty in ag usum plus his prep and team choices could be a bit outdated

7. skysolo - solid player overall, has experience in usum ag and also won agpl 1 playing this slot. might need support for teams but you can trust in him piloting them well which is all you really need from this slot

8. WSun1 - solid player overall and for sure will try hard if placed in usum but i feel like his building/playing is lacking compared to the rest of the players here. with some help he can do extremely good, dont sleep on him.

1. (kate) default0 - one of the best builders in this meta and plays very well nightmare to prep for but can still get pretty predictable as far as his team choices go. defo deserved at the top.

2. Nevelle - if he shakes off his rust and kinda try hards, i can see nev do very good here. his teams have always been very solid in natdex and im sure that will continue this agpl. might need an extra natdex player to bounce around ideas with him.

3. PinkDragonTamer - will need help with teambuilding here but pdt is good enough to pilot the teams at a really high level. defo an amazing buy for this slot.

4. WSun1 - not too sure how much he has been building in this meta but i know he used to make some heat teams here and did well in a lot of natdex tours. solid plays and builds are to be expected from him for sure.

6. lotiasite - has experience in this tier, plays well and can pick up meta changes extremely fast and adapt well in his teams. solid pick overall.

7. Frozoid - solid teams and plays. this could be a very good breakout tour for him. has the potential for a nice record here if given the chance. ranked at 7 for still being unproven.

8. LiderMeliodas - kind of a lowkey buy. not very proven in tours but people who know them are aware they are capable of doing extremely good in this player pool

1. Fc -one of the best builders in the meta and can play at a really high level. recent ssnl winner and had an amazing record in umpl. top pick for any team.

2. baconeatinassassin - even if he doesnt play it much, can still produce top notch teams and play at the highest level. another top pick

3. PinkDragonTamer - recently went undefeated in umpl. will need support here but he will pilot every team at a really high level. another top pick

4. default0 - very unique teams and high level plays here. kind of an enigma as far as team choices go so his opponents will have a rough time

5. TrueNora - rusty in ag but i believe he can turn things around. excellent builder in general and plays at a super high level. if he adjusts well to the current meta, it will be a top pick.

6. WSun1 - solid builder and player in general. solid buy for anyone

7. Pannuracotta - this might surprise most people. pannu got his first experience with galar back in ag snake and he did exrtemely well for his first big ag team tour. he showed a deep level of understanding in the builder and piloted his builds well. i also know he will try hard here which is always a huge plus. will be a very good player slot + support.

8. Royal1604 - had a pretty poor showing last umpl, and most of them wasnt even the team's fault, but i know royal has a higher ceiling just based off his amazing ag snake run. with a nice team support, he will pilot the teams very well if he gets comfy with em.

9. lotiasite - showed last snake to be a capable builder with some really nice plays. i expect very good things from him this year

10. Skarph - you can slot this dude into anything

11. Monsareeasy/ jerryl309 - kind of a lowkey pick. both got a couple very nice wins in ag snake and showed great promise. might need help with teams but both are nice picks

12. FatFighter2/Situm/Basedwhat/Basedburner/ Ballfire/ Maxomega - just gonna bundle all of the uber players here. not a lot of experience with the ag meta, but they are all extremely good competitively, and maining ss uber will make the transition to ag very easy. only problem would be their commitment due to upl, but asaik they shouldnt really overlap so thats good. will probably need team support/helpers

13. Geysers - solid player but his umpl run was a bit of a letdown with him resorting to just using sub-optimal teams and fishing for mu. if he can find his way again as far as building goes, will do well here.

And now for something completely different

Fardin said:
1. MZ - I'm assuming will he kind of try a little bit
Click to expand...

Reschedule this to not conflict with PUPL and I might

Who's gonna drown in your blue sea?

Wait why am I going for more than 3k? Thanks though.

Party rockers in the house tonight

Y'all do be addicted to mock drafts, I like it 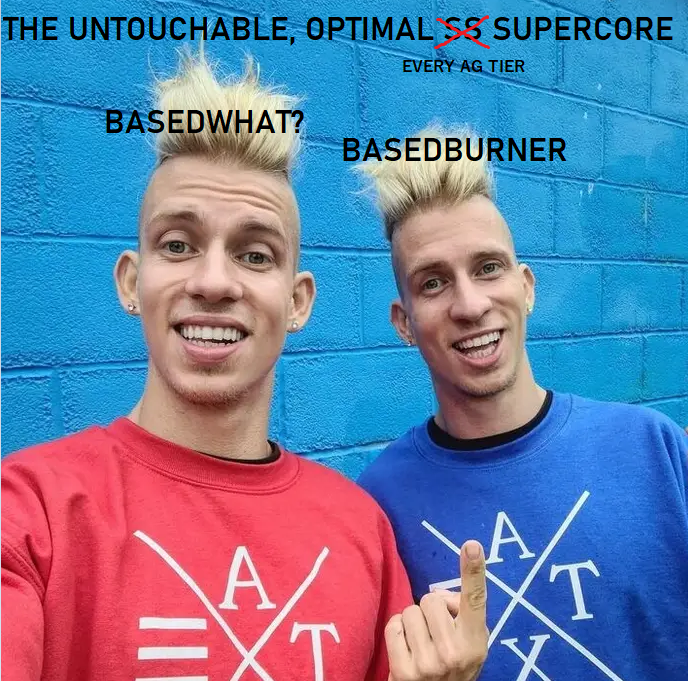